With the completion and successful launch of Hanaja's Body, I am happy to be back working on Lustfall Update 7 again! With the battle card commissions almost all being worked on/completed, we are very close to finally being able to experience the next chapter of the Lustfall story! I will be posting here and on socials when I have the early access and full release dates for it, so stay tuned! I know not everyone follows on Twitter or Patreon so I need to remember to check in with you wonderful people too from time to time. ;)

I'll go into more details when it gets closer to release, but I wanted to show off something unexpected and quite exciting! What you are seeing in the screenshot below is the boss battle (old screenshot, the enemy in the back now has a custom commission design).

This is from a whole Sidequest Dungeon that is possible thanks to a very generous supporter who subscribed at the Master/Mistress tier. As part of their reward, they got to work with me to design a sidequest and dungeon based on their ideas and desires, complete with unique battle mechanics not yet seen anywhere else in the game! 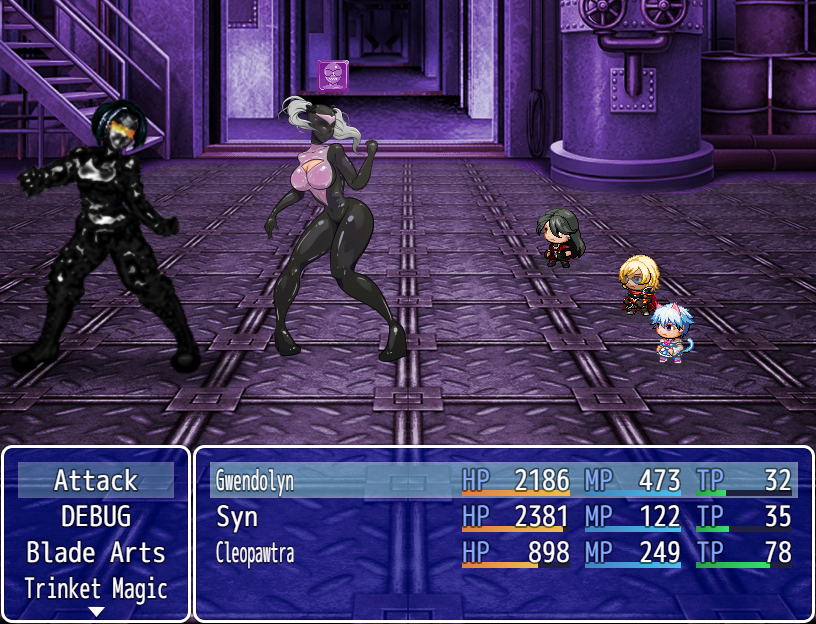 That energetic baddie looks a little like Cherri, right? That's because that IS Cherri, who has been corrupted by black latex goop and turned into a drone who will protect the boss. She's not the only one, either. During the fight, any of the four heroines can experience the same fate and fight with Lust Magic unique to their personalities and interests.

This area is a bit more difficult due to Latex magic and it's tendency to trap and encase the heroines, but if you choose to take on the quest, there are plenty of interesting rewards to find, including weapons that are a bit better than what is normally found at this point in the game.

(Psst. While this is an Update 8 thing, a SECOND Sidequest Dungeon is in development too!)

Oh, and that's not all. We've Re-reached Milestone #3!!! That means Game Over CGs are BACK ON THE MENU!!! They will be more of an Update 8+ thing, since I am dying to get Update 7 out as soon as possible (besides, there is also the deal with the NEW BATTLE CARD designs that is already coming in Update 7). I am compiling a list of all of the Game Overs and while I might miss one or two, there is looking to be around 40ish at the point where development is now. That's a LOT and many of them are 4+ characters, so the later ones can get pricey!

What is the next Milestone, you ask? Well, we have a #3.5, that's for Hanaja's Body that I added in between the original milestones, so for Lustfall the next one is Milestone #4: The In-game Battle Card and CG Gallery! No more manually tracking which cards you've seen, or creating saves to ensure you can see your favorite game over, there will be an easily accessible place to see them all! All 150+ cards.

If you want to help bring us to the next big milestone, or you want to dig deep and add a dungeon of your own fetishes and design to the next update of Lustfall, consider subscribing at one of the many tiers of support over on the official Patreon:

Thank you all once again for your continued support! Lustfall is really blossoming into something incredible and it's only possible because of fans and supporters like you!

Save the world or get f*cked trying!

Just reading this fills me with D E T E R M I N A T I O N, and Excitement!!! This is going to be a great update!!! Hope you're doing well and not overworking yourself!

Ty! There's a lot to look forward too so I hope everyone thinks it's worth the longer-than-anticipated wait!

I expect to have some release dates very soon! :)